← more from
Dagoretti Records
Get fresh music recommendations delivered to your inbox every Friday.
We've updated our Terms of Use. You can review the changes here.

by Dr. Pete Larson and his Cytotoxic Nyatiti Band 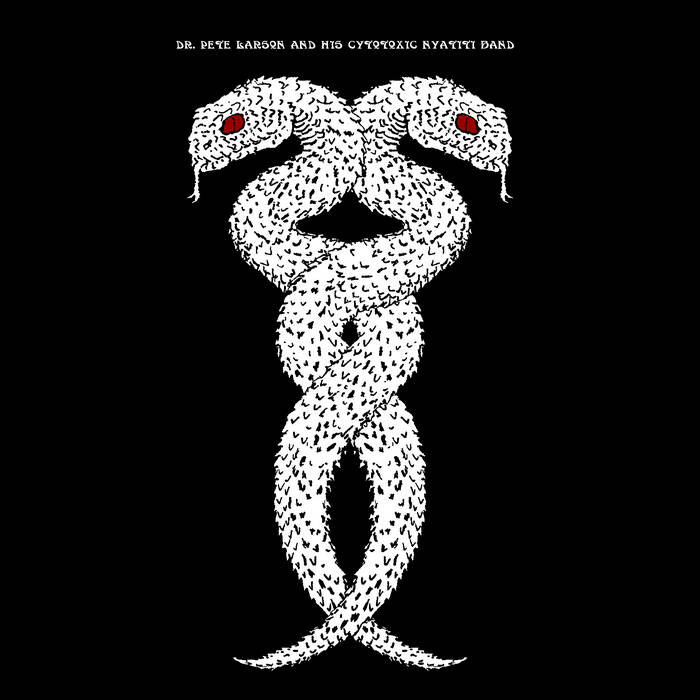 Boy, are y’all in for a treat. Dr. Pete Larson and his Cytotoxic Nyatiti Band is a record whose grooves overflow with undeniable lobe-shifting sound; all you really need to recognize that is a reasonably functional set of ears. Still, context is fun, and you might get a leg up on some other nerd with this info one day, so let’s get to it!

A quick history lesson:. In the midwestern freak scene of the 1990s/early 2000s, BULB Records was a beacon. Founded by Pete Larson and James Magas, but ultimately helmed solo by Pete, BULB took the shitty attitude and production values of punk and splattered it with unrepentant art damage, caustic humor, and layers of greasy squall. Several acts in the BULB orbit — Wolf Eyes, Mr. Quintron & Miss Pussycat, Andrew W.K. — would extend their tentacles well beyond the small coterie of goons in their initial base, but anyone in this milieu at the time knew that Larson (fka “Velocity Hopkins”, now Dr. Pete) was the daddy of them all.

As frontfucker for bands like Couch, 25 Suaves, and even the ostensible goof-off project Danse Asshole, Pete was a lightning bolt crackling through countless shitty venues. He was all sprints, high kicks, and staring people down until they partied to his satisfaction. Nobody raised a racket like this guy. In short, dude was intense, and within my motley crew of lifelong weirdo music friends, he’s still discussed with a degree of untouchability.

At some point in the mid-’00s, though, Pete effectively stopped playing shows, devoting his time instead to the study of epidemiology (yep, that’s where the “Doctor” thing comes in). For a few of the years between then and now, he was in Kenya, studying the transmission of malaria through mosquitoes. Sonic adventures fell to the wayside.

Restless and lacking social anchors while in Nairobi, though, Pete slowly got his groove back, at first slaking his sonic thirst with guitar and shamisen. Ultimately, he became enchanted with the nyatiti, an eight stringed lyre-like instrument native to the Siaya region of Western Kenya. Studying under Oduor Nyagweno — one of the last living elder players of the nyatiti (and subject of a Dagoretti release of his own, a must-grip if you haven’t already) — Pete eventually got the hang of it, and was fortunate to jam and record with some crack musicians he’d befriended in Nairobi before eventually moving back to Michigan in 2017, nyatiti in hand.

It would’ve been cornball (at best) for Pete to try and pass himself off playing “traditional Kenyan music” as an American dude in Michigan, but thankfully, this ain’t what’s gone down. His playing owes a solemn debt to the time-honored techniques, songs, and structures passed to him by Nyagweno, but Pete also brings much of his own history into the mix. The rock energy of his youth may be differently channeled now, but Dr. Pete Larson and his Cytotoxic Nyatiti Band is nonetheless a merger of its bandleader’s past, present, and a new, third-eye opening future, and pretty damn thrilling for the fact.

Pete’s roots in the American underground run deep, and the same is true of some of his collaborators here. Drummer Tom Hohman is most known for his work with righteous thumpers USAISAMONSTER; guitarist Fred Thomas is an underground lifer, with an acclaimed solo career and a dizzying list of credits besides. While less of a known quantity in the freaker firmament, the rest of the band is no less impressive in their pedigree: bassist Dave Sharp is a well-established jazzbo, and a longtime friend and collaborator (even traveling to Nairobi to visit Pete and steer his band there, NDIO SASA, through the phenomenal Dagoretti release Nairobi Music). Percussionist Mike List comes to the band from fusion ensemble Wisaal; vocalist Kat Steih is moonlighting here from her own boundary-pushing solo work.

Just as this unique band’s experience is expansive, so too is the music they make together. The forward motion on tracks like ‘Saba’ and ‘Tano Tano Tano’ is definitely centered around the nyatiti’s traditional cyclical repetitions, but when grafted to Thomas’ heady six-string froth and this relentless rhythm section, the music conjures plenty besides: the cosmic chug of early ‘70s German commune crews, the real-O-mind meditations of New England’s “New Weird America” jammers, perhaps even the most fried live Dead. It doesn’t quite sound like any of those things, though; it is a unique sound both ancient and modern, informed but unmoored.

Like I said way up at the top, though, you can hear that without my blabbin’. Dr. Pete Larson and his Cytotoxic Nyatiti Band is a deeply exciting development for longtime followers of the musicians in its ranks, but really, it’s pretty exciting for anyone with ears.

Koblo, Pwonja, World and Abiro are all traditional. All other compositions by Dr. Pete Larson and his Cytotoxic Nyatiti Band.

Dr. Pete Larson and his Cytotoxic Nyatiti Band play psyched out lyre music in a way that it was never intended.

Bandcamp Daily  your guide to the world of Bandcamp